MGED serves customers by purchasing electricity from regional generating plants all over New England and delivering this energy to Middleborough and Lakeville consumers. We also buy local energy produced by privately-owned solar arrays. Every customer who receives power from MGED is using electricity produced by this mix of generating resources including:

Energy produced by nuclear power is non-GHG-emitting. We own a share of the output of the Seabrook power station in New Hampshire and the Millstone power station in Connecticut. This part of the supply is labeled Carbon-Free Nuclear. Nuclear power provides our lowest-cost, most reliable supply through this legacy of partial ownership and through contracts for additional supplies, as Load Following energy (LFE). We've purchased the Emissions-Free-Energy Certificates (EFEC) for some of these additional supplies which counts toward non-GHG emitting supplies.

We have a reserved purchase of energy from the New York Power Authority Niagara Hydroelectric Power Station, a NY state/North East regional/federal power project which began operation in 1961. We have also contracted for Massachusetts hydroelectric projects at Cabot and Turner Falls. This total supply is labeled as Renewable Hydro and is non-GHG-emitting.

The Saddleback Ridge Wind Project is a 34.2 megawatt, 12-turbine wind project located in Carthage, Maine. Under a long-term contract, MGED receives just under 7% of the project's output. This produces around 7.35 million kilowatt-hours of electricity each year, or about 2.4 megawatts of capacity. This is listed as Renewable Wind and is non-GHG-emitting. See the latest generation output on the Wind Power Project page.

There are over 16 megawatts of privately-owned solar installations operating in the MGED service area. These include residential roof-top and yard solar arrays, commercial arrays and large-scale solar fields (with 2 community solar projects). We purchase excess power from homeowners and all power production from commercial installations and solar fields which feed into our distribution equipment. This allows the owners to gain the financial benefit of power sales and the dividend of Solar Renewable Energy Credit Sales (SRECs). MGED owns two solar arrays including the array on Middleborough High School, which provides energy and RECs. MGED also receives RECs from net metering customers who have received a rebate for their solar array. MGED has contracted for future solar projects in New Hampshire and Connecticut which will provide long term energy and environmental attribute benefits at reasonable prices.

MGED, with the other 40 municipal light plants in Massachusetts, supports legislation that affirms a target of 100% non-GHG-emitting resources by the year 2050 in support of the state's Clean Energy Standard. We are committed to reaching this goal while keeping our rates stable and our service safe and reliable. This requires that we balance our resources constantly and carefully to meet our customers' energy needs.

Here's How You Can Support Renewable Energy Yourself

MGED purchases and retires RECs on behalf of our customers through our +Green Choice program. All RECs purchased and retired by MGED for this program are produced by generators classified as Class I renewable resources by both Massachusetts and Connecticut.

Learn how you can help support renewable energy in New England for as little as 2 cents more per kilowatt hour and sign up today! 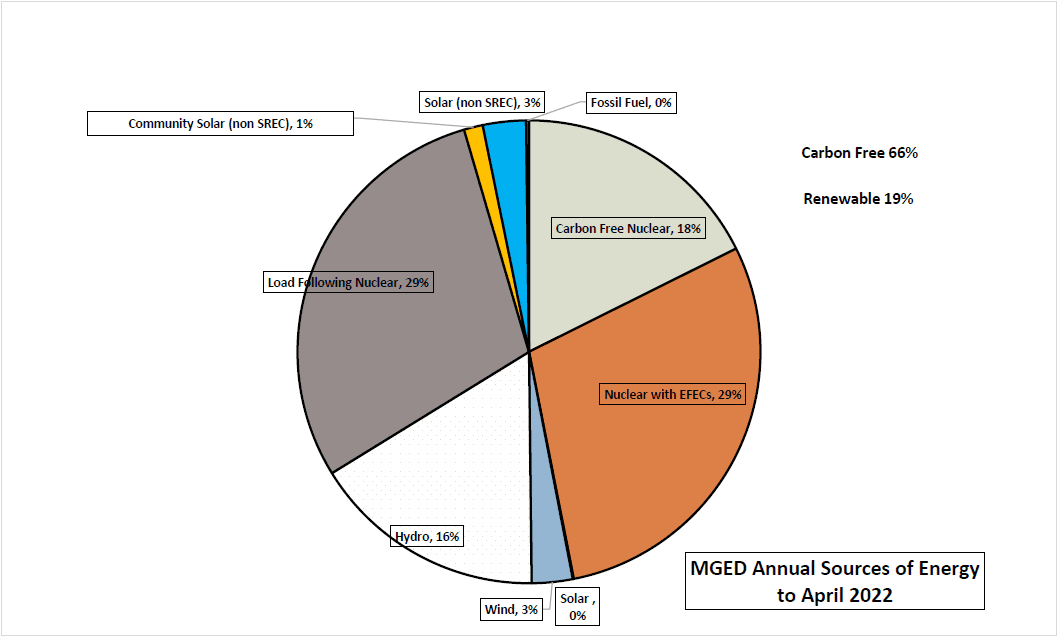